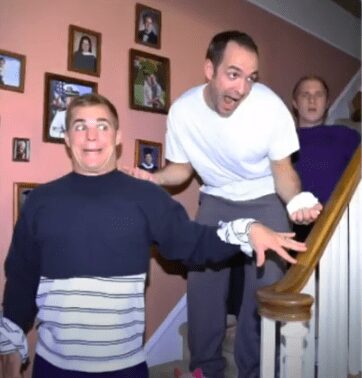 Our world is constantly changing, but if there is one thing that is respected and that is becoming accustomed to all our tendencies and our ways of seeing life, it is the code among brothers. The things that we can do among them and what we can entrust to our brothers have no comparison with other types of friendships. The main characteristics of the brothers are that they will respect each other, help each other and love each other no matter what. That your brother helps you or that you help him is a good example of what happens with this type of relationship.

In the changing and modern world in which we live the care of siblings is becoming more and more important, new characteristics have been added to the world of family relationships which is to take care of their wellbeing and to lead them along a path towards a good future, more and more older siblings are trying to explain their mistakes so that their younger siblings don’t make the same mistake, new codes have been made to help, with this also barriers are broken such as the one of silence, which before were unimaginable to jump.

Main reasons why the old brother code has had to be updated by adding other types of “laws” to be respected.

By this title I mean crying, many men in ancient times have not shared their emotions and have kept everything to themselves, psychologically it has been shown that this is wrong and that talking to people you care about and love you does not have to carry any shame.

Men don’t cry. This famous phrase has been denied many times and as time goes by you can see how many more people share their feelings and experiences with their brothers. Every man needs to share his problems and emotions with other people, this will help us to think from another point of view and not take all the problems away ourselves.

Another important point that many men were ashamed of in the past was the belief that you should not have conversations outside the boundaries, a type of thought and problem was considered to be as private as possible for fear of being judged or of what they would say.

Important facts about men and their feelings

Not paying attention to the advice given before and keeping all your problems and worries to yourself is a very serious problem. A study carried out in the United States shows that men commit suicide four times faster than women. Feeling bad about suffering is not good, suffering and feelings are what make us human, and we have to share them.

The brothers’ code sometimes forces us to keep quiet because we do not appear to be weaker, when we perfectly know now that being more sensitive does not mean being less of a man.

By not helping our brothers when we realize that they are going through a bad time is bad, besides we are already breaking the rule of taking care of them above all.

What can we do to solve it?

We must make them see that they can tell us their secrets and that there is no problem when they reveal them to us. We are their most loved ones and we will not judge them or develop a false idea about them because they will have their feelings for us.

We have to be much healthier with them and with ourselves, you can always start by telling them your problem and then ask and insist that they tell you.

We have to learn to see their faces and their reactions, learning from that is not bad, we also have to know how to take the first step so that they feel good about themselves and that they can tell us their problems when they see that we will not judge them.

Always keep in mind that a simple and spontaneous conversation can solve many things.

Is it possible to break the secret?

In any case, if you are being asked, you must know that it is important to open the lines of communication to help.

Let’s start by remembering what the old cases of brothers were like when they asked you to keep a secret. If your brother asked you to keep his secret, the best thing you could do was not to tell anyone. The best thing you could do when you found yourself in compromising situations was to forget that you knew anything. To think that the secret didn’t exist in your mind and that your lips didn’t know how to pronounce those kind of words. Nowadays this rule has changed, you can’t skip this code, but many times exceptions are made, we think that if we tell it it can be good for him, or that we can help him, but in many cases we are wrong.

What can we do before breaking the secret?

First of all start by talking to him, it is important that he knows your point of view and that, although it is very likely that he will not understand you, at least he knows what you think and your reasons. If this is not successful you can talk to a colleague of his, or someone else in his most trusted circle.

If you are going to talk to someone in the circle, do so carefully so as not to break the secret, inform them of what is going on and why it is so important to deal with the issue in question. It is important that they join forces and care about it. If the problem in question is on the part of the couple, talking to such a person would also be a good plan, to find out what is going on. It is important to do this because you could even save your brother from a divorce.

Whatever you do, do it carefully and thoughtfully, because you don’t want to lose one of the most important people in your life. If you still have to tell the secret and some problem or anger arises against you, don’t worry, it is likely that he will thank you in the future.

After this, what is the new code?

Basically it is to take care of your brother as if nothing else in the world mattered to you and above all, it is important that there is a safe and healthy environment where he can open up about his feelings and talk about his problems.

It is important to say that if he can share his thoughts and feelings you should too. And if you dare to take the first step of sharing your problems and feelings, CONGRATULATIONS.

Other rules of brothers who are still among us

1- No one touches you: this rule is very common; it is usually said to the little brother when he starts the first day of school. It’s very contradictory because you can give him/her a little slap and a little push.

2- Clothes are inherited: in any self-respecting younger sibling handbook, this is the golden rule. Whose clothes are born first is destined for a double life, even if 6 years have passed and that jumper is no longer worn or even if your older brother is a boy and you are a girl.

3- The big brother has the power: often he is the one who chooses the seat in the car at the beach in the swimming pool etc.  It’s not always like that but many times older brothers tend to be very bossy with their younger brothers.

Besides all the things that can happen with your brother from arguments to fights, you will know that you have an eternal friend, travelling companion and moral support. It is important that you know this and that you realize how lucky you are, even if you are the oldest or the youngest.