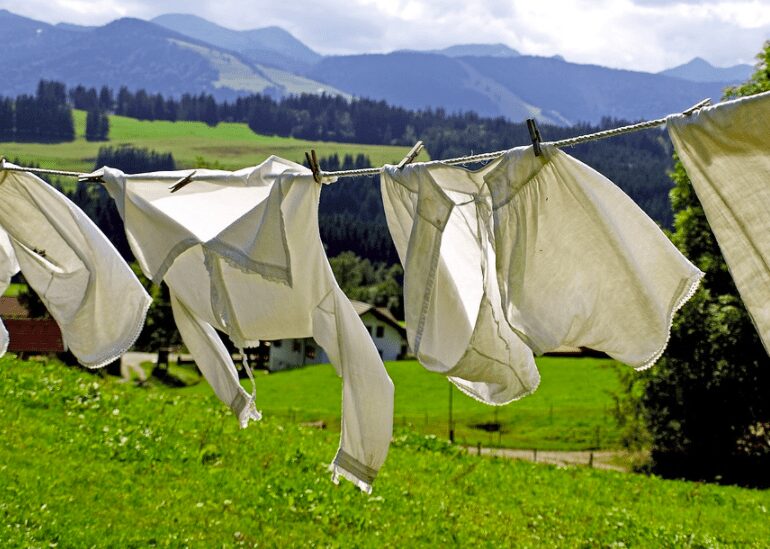 There are many people who think that giving up underwear may be something they would never consider, but there is also a large part of the population who have decided to stop wearing underwear for their personal comfort.

Wearing underwear has become very routine, and could be compared to something as simple as breathing.  You wear underwear under your clothes absolutely every day, to go to work, to go to a dinner party, in conclusion, you wear it whenever you are going out of the house.  Some people may prefer brightly coloured briefs to lacy bikinis.  You have to know that you have a lot of options in underwear, and you can try all the types of underwear that you find comfortable, but if after trying them you see that none of them fit your taste, you have the option to leave them off.

Now I want to ask you the following question, why do we wear underwear? For this question there is no concrete explanation, but there is a common theory that it is considered as a social norm which has passed from generation to generation and that is not abandoned nowadays, since we were little our parents already instilled us with the mentality that we have to wear underwear. The next question we have to ask ourselves after knowing why we wear underwear is: Is it really necessary?

When you stop wearing underwear you reduce the risk of a yeast or yeast-caused urinary tract infection considerably.

I’m sure no one likes to get a yeast or urinary tract infection down there, the symptoms of these little diseases are itchy, very sensitive and I assure you very annoying. It turns out that by eliminating underwear you reduce the chances of developing a urine infection, this can happen especially to women or men who tend to have regular infections in their most intimate area. And why does this happen?

Basically underpants or briefs tend to accumulate excess moisture and microbes. As you may have already thought, this is one of the main causes of disease. This can happen if you wear panties when you are at the gym, while you sleep or if you wear panties that are not breathable.

Panties can even cause a urinary tract infection because the material they are made of can cause bacteria to spread from the rectum to the tract, so it is very important that you know why you can get this kind of infection, you already have the answer if you have problems from time to time and you don’t know why. I also have to tell you that there is no hard evidence that this happens and that you can reduce the number of infections, but many women have noticed a big change.

Not wearing underwear will help you breathe better down there at night while you sleep.

Don’t think that stopping wearing underwear just before bedtime is not a hard and fast rule, but this technique is a basic rule to help your intimate area and give it a break from all the day you’ve been wearing underwear. Gynecologists usually recommend and say that the vulva area has to be exposed to the air like any other area of the body.

This ritual and custom should be followed by all men and women who are likely to suffer from infections in their most intimate parts. As mentioned before, you should follow this routine at night because it can have very good benefits for your intimate area.

As also mentioned before underwear traps moisture from the body and that is where fungus grows and allows fungus and bacterial diseases to develop. So keeping that area clean, dry and out in the fresh air will help the health of your intimate area considerably. So if you’ve spent all day in underwear that is tight and uncomfortable, I strongly advise you to stop wearing clothes at night.

You will reduce irritation and chafing caused by underwear.

Friction from underwear is usually caused by chafing from fabrics that are usually not good for your skin, this style of fabrics are usually artificial or synthetic fabrics. What they will do is irritate the intimate parts touching the weakest areas, which will produce a burning and a very sharp pain, that surely if you have lived it or you are living it you will not want it to be repeated.

There is even a very surprising fact that says that people who suffer from menopause are more likely to suffer this type of injury. This is because older women tend to have weaker and thinner feet, which is why they are more likely to have injuries to their feet.

More likely to have lesions in their private parts.

If you give up underwear altogether, consider the clothes you wear.

It is very true what we have said before that if you stop wearing pants or panties your chances of suffering any disease or chafing will be reduced, but the trousers you wear will also greatly affect injuries.

Let me give you a very simple example, the fact of wearing pajama trousers which are wide and that your intimate parts are not much in contact with the skin will help a lot to avoid diseases, but if you wear trousers which you go tight, are in contact with the skin, and is a material that is not comfortable for your skin the fabric of the trousers may even cause more harmful injuries to your body. This is caused by the fact that you no longer have the protective layer you had before. Depending on which trousers you wear, the underwear will act as a barrier against the rougher tissues of your skin.

The irritation caused by the different tissues can come in different forms of pain or signs of infection, for example, it can be in the form of itching and redness, these symptoms mimic the symptoms of vaginal infections, but in reality it is only a kind of inflammation and itching, which is caused by chafing. When it comes to dressing, it also depends on whether you are depilated or shaved in the intimate areas of your body. If you are depilated you can wear clothes like skirts, dresses and wide trousers, these clothes are perfect if you stop wearing underwear every day.

I’m going to talk a little bit about the irritation caused by chafing underwear. The rubbing can be less if we stop using laser or wax depilations, this is because most people who depilate with laser and wax tend to make their skin more sensitive, remember that these processes are not natural and what happens is that by putting them into practice we eliminate a protective layer such as the hairs.

If the decision you have made to live your daily life involves leaving your underwear behind every day, you should know that if you do any sport or just sweat, you are likely to notice a sharp and unpleasant odour coming from your most intimate parts.

This happens because the perspiration of your skin allows bacteria from the hairy area to cause a sharp genital odour. Which, as mentioned before, is not pleasant.

By not wearing underwear you have no barrier between your trousers and your intimate area, this causes the sweat that used to reach your underwear to no longer do so, therefore, the sweat goes directly to your trousers. This will, as you can imagine, make you notice your body odour much sooner.

So now you ask me, is it good to wear underwear during a workout or an event where we are going to sweat?

Well the correct answer is very difficult, this is because it all really comes down to your tastes and preferences, but it is also true that there are many women and men who increase their performance while playing sports when not wearing underwear, the reason is simple and it is because they tend not to suffer so much pain in the intimate area, they tend not to have chafing or swollen parts which allows them to perform better. The feeling of flexibility and mobility also increases because they do not feel that kind of grip as when they wear underwear.  But it’s not all good when doing sport without underwear, here’s why.

By not wearing underwear while training you can increase the chance of getting micro cuts.

The most common problem that can develop when doing sport without underwear is that of micro cuts in the most intimate areas, if you don’t know them I assure you that it is a very painful problem. Skin fissures also called micro cuts are usually caused by skin irritation or stretching of the skin. The wounds can be produced by using inadequate clothing when doing sport, the rubbing of synthetic trousers and that is not breathable increases the friction with the skin and often causes problems of irritation and swelling.  So you know it is very important to wear good trousers when doing sport to make sure you don’t have this problem.

In a study carried out at an aclinic in Washington the lead researcher compared the knee to the vaginal area, and commented that a good fall could scrape, dent, cut and bruise the knee, and after a period of rest it would return to its former characteristics. Exercising with a thong is much worse than without, as apart from the friction the thong has on the skin, the material it is made of can cause microbrasions which can lead to infections that cause discomfort and redness.