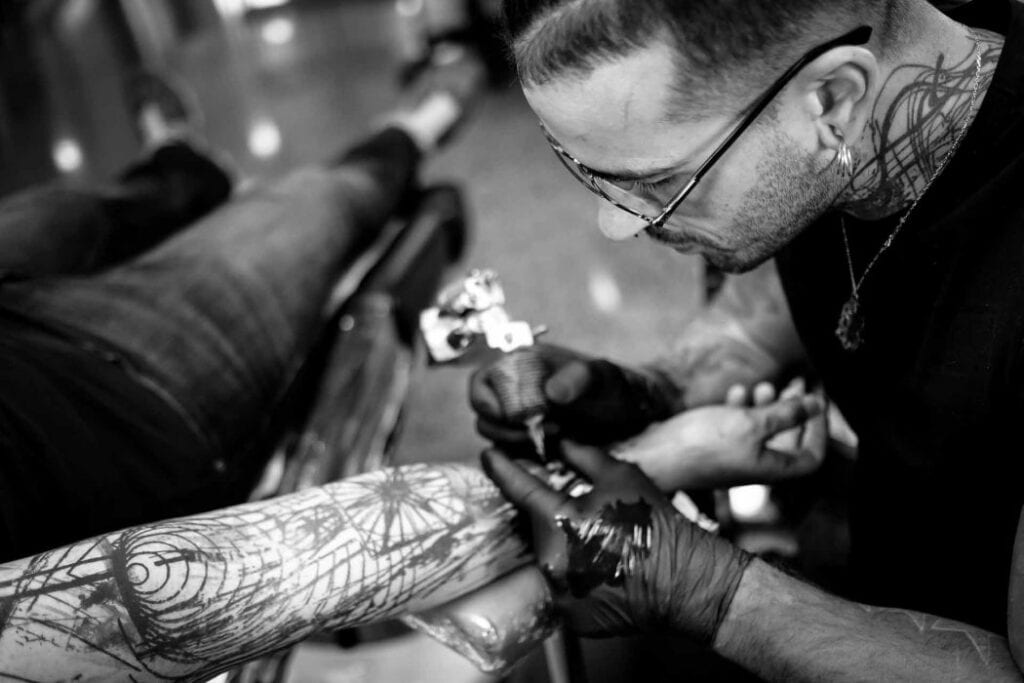 Abel Miranda has created a new way of tattooing, called Avantgarde. It is a new style of his own that he has created to capture new ideas on the skin and create his artistic works around the world.

His style is totally innovative and aims to break all other styles when it comes to tattooing, his style develops into a more personal creation and with more definition, it becomes a much more exclusive tattoo.

Everyone involved in the tattoo industry thinks that it is very important to innovate and replicate other aspects of different styles. The technique developed by Abel Miranda has been constantly focused on extracting geometries and perspectives that develop a new style of tattooing. The combinations of these are beginning to be recognized worldwide for all the work and complicity that his works of art form on the skin. Her work has been particularly based on taking ideas from other styles, this includes all kinds of colors and shapes that she then brings together and achieves brilliant results on the skin.

The tattooist Abel Miranda wanted to go one step ahead and started to know and visit other parts of the world with his peculiar style of tattooing with the avantgarde technique. His name is in commemoration of the studio he founded in 2017 in Barcelona, Spain.

Little by little he has been polishing his idea and perfecting it until he has been able to achieve a reality and a brilliant form that is enchanting many people. The combination of styles achieved by Abel has attracted many new clients and people involved in the tattoo world to achieve a different and alternative work to other types of tattoos.

The styles that he has based himself on and that have helped him to achieve his own style have been Organic, Abstract, Splash, Geometry and color.

His style is centered on geometric forms prioritizing linear forms. Although he also uses other types of shapes such as oblique.

This manages to attract the attention of the most representative points of the tattoo.

The points mentioned above are the ones that have allowed Abel to achieve worldwide recognition, he has managed with his tattoos to transmit sensations and admiration towards him for all the things he has done that were previously thought impossible in the tattoo world.

This fact creates a great value on the tattoo, it creates a relationship between each element and the canvas that is the skin.

The dynamism is also part of his style, this allows him that even if it is a big tattoo or something smaller it always attracts the eye and makes it stand out among others. The key to all this is that he manages to adapt the forms to the client’s own body, changing the effect and the sensations that are generated in the body itself.

One of the many tools he uses is formed by knowing the idea and the feeling of the tattooed person, this makes him unique, he empathizes and knows how to adapt perfectly to what he wants and manages to shape a reality. This makes the tattooed person carry and appreciate the work for years.

If we observe what this new style reflects and we appreciate the work behind it, it leads us to discover and realize that we are seeing the birth of a new avantgarde style, the relationship between the body and the work is created. We manage to break all those old patterns and are crowned as the innovator of recent times.

The studio of the new style

The Avantgarde studio: Is the name of the studio created by Abel Miranda. In his studio we can make tattoos with or without financing, we can also find courses for professionals who want to increase their tattooing techniques or for those who want to start in the world of tattooing.

Abel Miranda, the creator of the Avantgarde style will be in New York from March to April 2021.